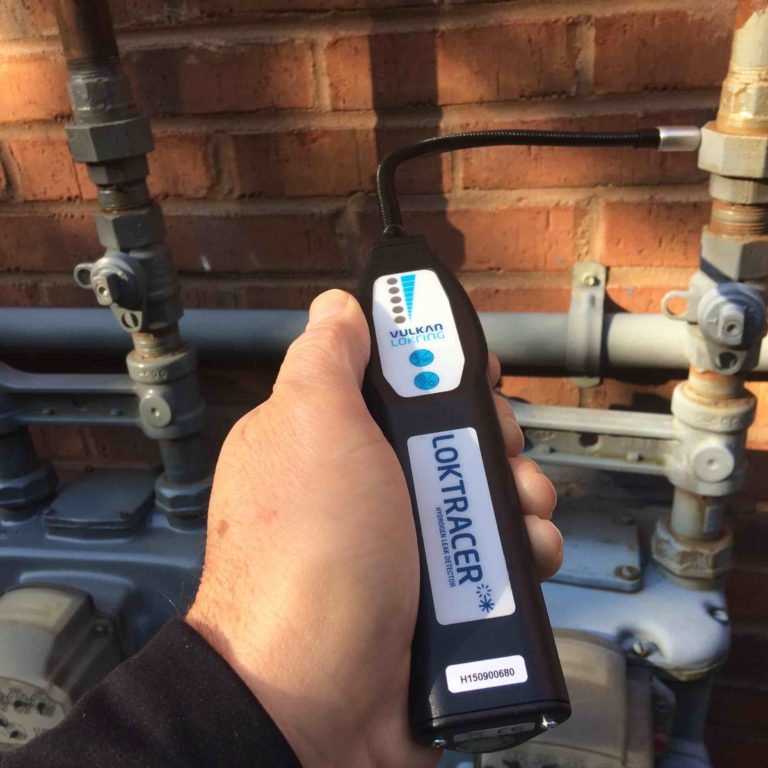 For more info on common applications for hydrogen leak detection.

How Our Hydrogen Leak Detectors Work

Our TLD.500 & TLD.1000 hydrogen leak detectors use a hydrogen sensing chip that activates in the presence of hydrogen. The hydrogen sensing chip is so sensitive that it can detect trace amounts of hydrogen from and exhaled breath! Leaks are found by using a a 5% Hydrogen 95% Nitrogen tracer gas mixture, then placing sniffer tip of the Hydrogen Leak Detector along the suspected piping. When a leak is present the Hydrogen Tracer Gas will escape and LOKtracer will react. When a leak is detected the Hydrogen Leak Detector increases its beeping and amount of lights on the panel in relation to the amount of hydrogen detected. This process works even for buried or covered equipment as long as it is permeable to gas.

Using hydrogen/nitrogen as a tracer gas provides a significant cost advantage to helium sniffing, while offering a 1000x increase in leak detection sensitivity over bubble testing methods. The TLD.1000 Hydrogen Leak Detector provides a quantitative leak rate display in ppm with leak rate sensitivity to as low as 1 ppm. The TLD.500 Hydrogen Leak Detector is a cost effective option perfect for when leak location is the most important feature.

Helium sniffing was the preferred method of tracer gas leak detection for many years. However, increased equipment cost and helium availability has limited the applications in which tracer gas could be used. As a result, users have had to employ less sensitive technology methods. Helium leak detectors can be either mass spectrometer or thermal conductivity technology. In comparison to hydrogen tracer mixture, helium mass spectrometers are 20x more costly than hydrogen, while helium thermal conductivity suffers from decreased sensitivity and more frequent service. Also, both helium methods pull a gas sample into the probe which can cause clogging of the probe. Our hydrogen leak detectors avoid this issue by being "impact" detectors, meaning no gas is drawn into the detector.

Bubble testing is the accepted low cost method of finding leaks. Using soap and water solutions, bubbles are formed at the leak location. An alternative method is to submerge the test article in water and look for bubbles. However, these methods are subject to lower sensitivity. Using a hydrogen mixture tracer gas provides at least a 1000x increase in sensitivity. Furthermore, leaks that do not produce a bubble can be detected with either the TLD.500 or TLD.1000 Hydrogen Leak Detectors. 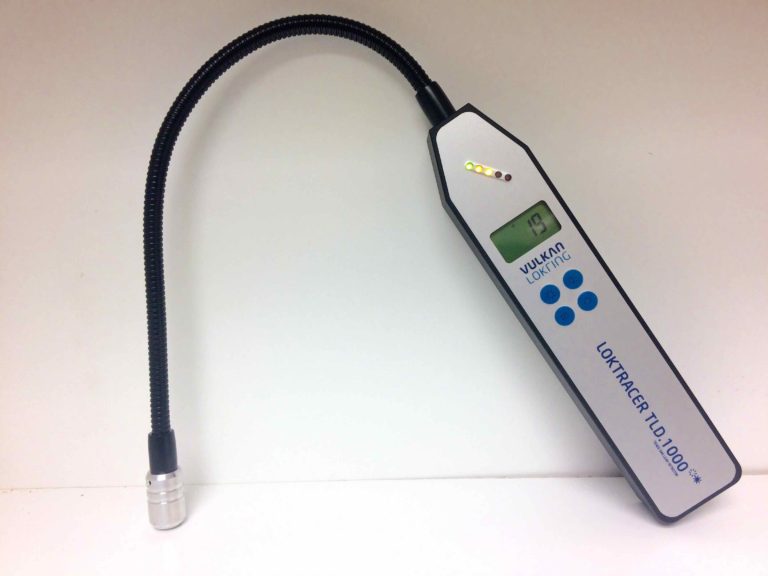 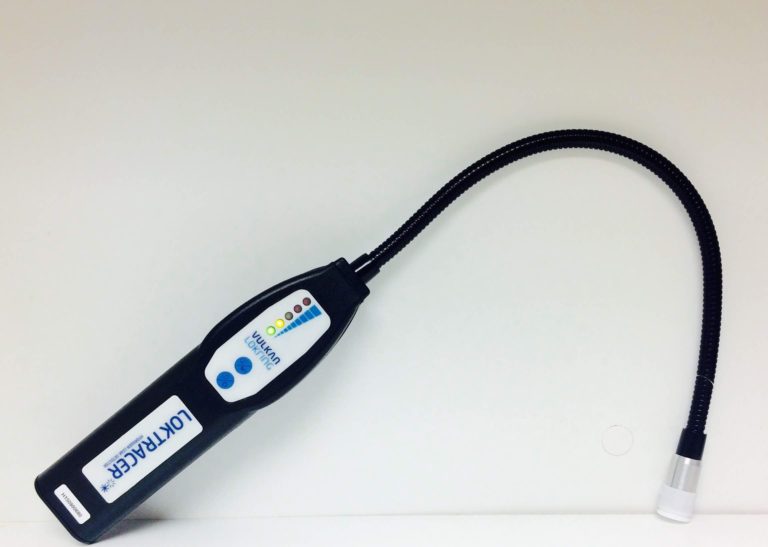 A. In 100% concentration, that is the case. We always recommend using 5% hydrogen mixed with 95% nitrogen because hydrogen is not combustible in nitrogen until hydrogen represents 5.7% . This mixture is green label non-combustible, therefore it will never have the ability to combust or increase the intensity of a fire.

Q. Will the hydrogen in the mixture settle out and cause an unsafe condition?

A. No, it remains mixed at all times. Inert gases cannot stratify. If they did the gas that makes up our atmosphere would stratify into pockets of disparate gases resulting in all of our deaths.

A. The TLD.1000 shows a quantifiable H2 leak rate and can detect into the single digit ppm values. The TLD.500, while not displaying a quantity of H2, can detect a leak concentration in the 25-35 ppm range. The detection limit is actually smaller but the user cannot always distinguish that low of a signal as a leak.

Q. Which is better as a tracer gas, hydrogen or helium?

A. In the past, helium was the best tracer gas because of its availability, the reliability of equipment to detect it, and its low background amount in air (0.5 ppm). Using hydrogen mixture as a tracer gas has become more popular because instruments like the TLD.500 and TLD.1000 have drastically improved in being able to find small leaks. Also, helium is in short supply and expensive. Another benefit is that hydrogen also has a low background in air (0.05 ppm).

Q. What is the cost of the 5% hydrogen, 95% nitrogen tracer gas compared to helium?

A. 5%H2/95% N2 is 15-25% the cost of 100% helium. While there are efforts to lower the helium concentration to also lower the cost, that affects the sensitivity of the helium leak detector to find smaller leaks. Also, because the helium/nitrogen is now a mixed gas, there is a charge to mix it at the factory. Therefore, cost savings by lessening helium amounts in the mixture may not significantly reduce overall cost.

Q. Where have hydrogen leak detectors been used in the past?